Building, Diving and Breathing: A Mini-Phenomenology of Reading

The nature of my reading experience really varies depending upon what kind of text I am reading.

If I am reading non-fiction or something that is clearly making an argument, I go into it with something like a mental model of the classical outline structure. That is, in my mind I already have something that is built like this

This structure is then replicated for each of the supporting points and larger points, depending upon the size. As I read, I start to fill in these slots.

So, for example, with How To Be An Anti-Racist (by Kendi), the slots were filled in this fashion, more or less.

Attempting to fill in these slots while reading has several implications for me.

First, if I am not able to fill in the slots, my evaluation of the text immediately starts to sour. It metaphorically feels empty. There is not enough there there (to draw on the famously misunderstood Gertrude Stein quote). This is especially the case if the text does not present the counterpoint on its own. I expect anybody making an argument to anticipate questions and address them. When they don’t, the still empty slot reserved for the counterpoint starts to overshadow whatever is coming next. Even though new ideas are being introduced, part of my mind is still focused on what has not been addressed.

If I am able to produce the missing counterpoint myself, the cloud is removed. I will then typically go back and re-read whatever section had been obscured by my distraction.

Second, if I realize that I have misunderstood or misconceptualized a larger point or a supporting point, I need to go back and recalibrate the sequence of boxes to make sure that I have them right, as well.

Rearranging the blocks is not always a joyful process.

But I typically pick up the pieces and start building again.

This cycle of construction and destruction is why I only like to read one non-fiction book at a time. It gets dangerous if the floor is covered with multiple sets of collapsed and collapsing blocks.

Though of course, when it comes time to write, I gather all the blocks from lots of books and thrown them into one big mess of a pile and start digging through them.

Third, at some point when reading and filling out a growing number of blocks I need to stop and come up for air. Typically metaphorically, but there have been times when I find myself a bit breathless as I race through an argument that somebody is making. Arguments that continue to add supplemental point after supplemental point or detail after detail put me in position of a free diver, dropping further and further down, knowing that my return to the surface has to be methodical or I risk (metaphorical) disaster. The line there and back matters. 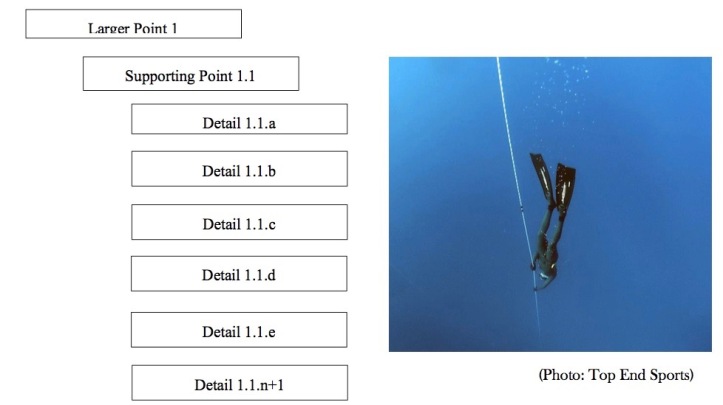 We know from research that many students who struggle with reading can drop down into the depths of an argument and not be able to find their way back. Or they do not stop and come up for air, instead racing from one point to the next, leaving confusion in their wake. When I start to feel light-headed, I know I need to surface and resume the dive after I have gotten my breath back.

There are also times when I feel like I have gone deep enough into the depths of a particular argument. What lies ahead seems to be darker and colder waters rather than any new revelations. At some point there is not much more to see. There is no there there.

With poetry, it is totally different.

Edward Hopper and the House by the Railroad (1925)

Out there in the exact middle of the day,

This strange, gawky house had the expression

Of someone being stared at, someone holding

His breath underwater, hushed and expectant;

This house is ashamed of itself, ashamed

Of its fantastic mansard rooftop

And its pseudo-Gothic porch, ashamed

Of its shoulders and larger, awkward hands.

But the man behind the easel is relentless;

He is as brutal as sunlight, and believes

The house must have done something horrible

To the people who once lived there.

Because now it is desperately empty,

It must have done something to the sky

Because the sky, too, is utterly vacant

All that is present is a single pair of tracks

Straightening into the distance. No trains pass.

Now the stranger returns to this place daily

Until the house begins to suspect

That the man, too, is desolate

And even ashamed. Soon the house starts

To stare frankly at the man. And somehow

The expression of someone who is unnerved,

Someone holding his breath underwater.

And then one day the man simply disappears.

He is a last afternoon shadow moving

Across the tracks, making its way

Through the vast, darkening fields.

This man will paint other abandoned mansions,

Always they will have this same expression,

This utterly naked look of someone

Being stared at, someone American and gawky,

Someone who is about to be left alone

Rather than diving in and out of an argument, or an idea, here I try to stay in the poem as long as possible. Even if the poem refers to the passage of time, I think of the poem itself as a given moment that I am exploring. Not in a linear fashion, though on my first pass through I read from start to finish. But then I begin to wander around. Or rather, move things around.

I’m not very interested in the rhyming or words – instead, I am interested in how suggestions and images repeat, complementing or challenging each other – I work on the rhyming of ideas. I don’t picture things. Instead, I look for connections based on the responses it is creating in me. For example, in this poem I might start by thinking about these phrases:

This house is ashamed of itself, ashamed

Of its shoulders and larger, awkward hands.

But the man behind the easel is relentless;

Once I have a critical mass of reactions (which varies based on the poem, my mood, my mind set and perhaps things like phases of the moon), I start to build chains of the pieces of text, with my responses circling them like nervous familiars. Rather than building an argument, I am interested to see what the parts of these chains add up to. I actually place the pieces in a sort of equation or logic statement.

≈ The pain of people and things in the process of being left behind, again, is amplified when they feel like they have no control over the situation. Here, not only are they ashamed of being emptied in some way, they are also ashamed of being ashamed.

Or something along those lines. Again, it is a line that I can move back and forth along that I am searching for.

I do this with some level of precision, but the process is not dispassionate or cold. Quite the opposite. When a poem grabs me, I will keep moving pieces around, excited to find new chains of thoughts.

I also accept happy accidents, such as the mention of diving and the holding of breath in this poem. These metaphors nicely complement my arguments about non-fiction above, but I did not plan it that way. Or did some part of my mind remember those lines when I decided to use this poem to illustrate what it feels like for me to read a poem? 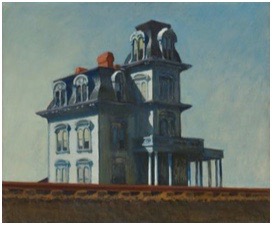 Here, the poem is responding to a particular image – Edward Hopper’s House by the Railway. What does exploring the image before or after reading the poem do the chains of responses that I am stringing together? Do we consult such images for confirmation? Do we look for the DNA of a text in such an image? Do we give priority to whatever came first chronologically, or does temporal order not matter?

When I am confronted (why such a strong verb?) with this situation (why such a freighted noun?) – a specific image that a poem is referencing – I don’t try to map ideas from the poem onto it. Rather, I take the whole of the image as well as pieces of it and add them to the chains of ideas. Thus,

≈  Though burdened with a strong feeling, the house (metaphor) recedes quietly into its own shadows. What would John Prine have me do? Say, “Hello in there.”

Rather than moving myself, I can keep adding and moving pieces around, with no need to worry about taking a breath. I can be in this moment for as long as I want to be. Since this takes time, the moment might seem to have passed, but it is actually always arriving and leaving at the same time.

My Tweets
Join 24 other subscribers